On 28th April, Poetry Day Ireland, a team of Board members tweeted extracts from work by poets from Myanmar at regular intervals throughout the day.

Since our last newsletter we have issued statements in response to the shocking rendition of journalist and blogger Roman Protasevich and student Sofia Sapega in Belarus and sent messages of support to our colleagues in PEN Belarus.

“Irish PEN/PEN n hÉireann utterly condemns the actions of the Belarus Administration in forcing the diversion of a Ryanair flight for the purpose of extracting and holding a journalist and his companion.”

We also issued a statement against the online harrassment of journalists on Social Media, quoted by Martina Devlin in her Irish Independent column on Saturday 15th May: “Irish PEN unreservedly condemns online attacks on journalists, which have real and damaging effects on writer’s ability to work and speak freely. Such attacks represent a direct threat to freedoms of thought and speech and by extension, to democracy itself.”

In this context, we’d like to draw your attention to Julie Posetti’s UNESCO document on violence/harassment against female journalists: The Chilling

and to The English PEN paper on Online Harms:

On 20th May 2021, we joined 49 other PEN Centres in a statement calling for the release of Osman Kavala .

Our co-operation with PEN Centres in England, Scotland and Wales continues, with exchanges of news and ideas and some co-operative actions, along with plans for future joint projects.

Our Freedom to Write sub-committee has joined the TURKEY ACTION GROUP. A representative attended the first meeting of this group which was both deeply interesting, as we learned of the work of other Centres, and alarming as we heard of the further erosion of rights in Turkey.

Members of the Board attended the Writers for Peace conference via Zoom, 9-11 June. 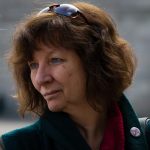 For the attention of;

The Irish Freedom to Write campaign and Irish PEN believe that Oleg Sentsov was imprisoned solely because of his opposition to Russia’s occupation and illegal ‘annexation’ of Crimea. We call on the Russian authorities to release him immediately and to respect Oleg Sentsov’s human rights, including the prohibition of torture and other ill-treatment, and his right to medical attention.

We further call on the Russian Authorities to free all who are held solely for the peaceful exercise of their right to freedom of expression and to return all Ukrainian nationals who are currently held in Russia to Ukraine, as required by international law.