Joseph O’Connor was born in Dublin, Ireland, on September 20, 1963. His parents, Sean O’Connor and Marie O’Grady, took an interest in fiction, poetry, theatre and music. Joseph’s father was born in Francis Street, in one of the oldest parts of Dublin city, the Liberties. Several of the stories and songs of that independently-minded place have appeared in Joseph’s fiction and other writings. His father’s memoir, Growing Up So High, was published in 2013 and became an Irish bestseller. Joseph’s sister, Dr Eimear O’Connor, is also a published author and scholar; her book about the Irish artist Sean Keating was published to wide acclaim in 2013. Their sister, Sinead O’Connor, is the internationally acclaimed singer and songwriter. Their younger brother Eoin works for Sony Music Ireland, and another brother, John, is a psychotherapist.

As a child and as a teenager, Joseph was fond of reading. His father had a passion for opera and Victorian poetry, and his mother admired the work of Oscar Wilde and Kate O’Brien. The house was full of books of many kinds; favourites included Brendan Behan, Flannery O’Connor, Sean O’Faolain, Liam O’Flaherty, Kingsley Amis, Yeats, James Plunkett, Patrick Kavanagh, Steinbeck, Hemingway, Graham Greene, Maupassant, old Penguins, the fairytales and folklore of Sinead de Valera, and the inexpensive editions of new Irish fiction then published by Poolbeg Press. Encountering JD Salinger’s The Catcher in the Rye and John McGahern’s collection of short stories Getting Through, both of which books he read when he was about seventeen, made him wish to be a novelist himself.

Joseph attended University College Dublin from 1981 to 1986, where he studied Literature and History and wrote for student publications, also working part-time as a journalist, reviewer and researcher for Magill magazine and The Sunday Tribune. Following the death of his mother in 1985 he took five months away from the university, during which he went to Nicaragua, reporting on the aftermath of the Sandinista revolution for various publications in Dublin. On his return to UCD he completed an MA in Anglo Irish Literature, writing a major thesis on the work of the 1930s Irish poet and activist Charles Donnelly for which he was awarded a First Class Honours. He spent a year as a postgraduate at Oxford University before moving to South-East London, where he lived for the remainder of the 1980s. For a time he worked as a fundraiser for the British Nicaragua Solidarity Campaign, occasionally writing for the magazine City Limits and other London publications. He submitted many short stories to literary magazines, all of which were rejected.

In 1989, his first short story ‘Last of the Mohicans’ was published by Ciaran Carty, editor of the Dublin Sunday Tribune’s New Irish Writing page. A second story, ‘Ailsa’, was published some months subsequently. O’Connor won that year’s Sunday Tribune/Hennessy First Fiction and New Irish Writer of the Year Awards, which were judged by the poet Brendan Kennelly and the novelist Piers Paul Read. He continued working on his debut novel, actually his third or fourth attempt at a first novel. He won the Time Out Magazine Travel Writing Prize in 1990 for an article about being arrested and briefly imprisoned in Nicaragua.

His first novel Cowboys and Indians was published in 1991 by Sinclair-Stevenson, London, and was followed, later the same year, by a collection of short stories, True Believers. Cowboys and Indians received warm reviews, became a number one bestseller in Ireland and was nominated in the First Novel category for the Whitbread Prize. He returned to college, receiving an MA in screenwriting from the Northern School of Film and Television, Leeds Metropolitan University. His second novel, Desperadoes, drew on his experiences in revolutionary Nicaragua and was widely acclaimed. It was followed by The Salesman, a contemporary psychological thriller, and Inishowen, a love story set in Donegal, New York and Dublin. The feature film, Ailsa, for which he wrote the script (based on his short story of that name in the collection True Believers) was directed by Paddy Breathnach in 1992, winning several awards, including the San Sebastian Festival Prize. Breathnach has also directed two shorter films written by Joseph O’Connor, A Stone of the Heart (Cork Film Festival Prize) and The Long Way Home. A script of Joseph’s won the Miramax Ireland Screenwriting Award in 1995 but was never produced. He has several other film scripts that have never been produced and he would like to win prizes for all of them.

In 1994, he was asked by The Sunday Tribune to cover the adventures of the Irish soccer fans at that year’s World Cup in America. His extended diary of the trip was the centerpiece of the collection The Secret World of the Irish Male, a surprise perennial bestseller in Ireland. Edited and compiled by the acclaimed novelist Dermot Bolger, it was described by one critic as ‘the most apoplectically funny book of the year’. It has been also published in Italian and French.

In 1995, he wrote the stage play Red Roses and Petrol, which played to capacity houses for several months at the Project Arts Centre in Dublin, before transferring to the Tricycle Theatre in London, and then back to Dublin, where it played a successful run at the Tivoli Theatre, Francis Street, indeed directly across the street from where his father had been born. Red Roses and Petrol, directed by Jim Culleton for Pigsback Theatre Company, won the In Dublin Award for Best New Irish Play. His other stage plays include The Weeping of Angels for the Gate Theatre, Dublin, starring Brenda Fricker, True Believers and Handel’s Crossing for Fishamble Theatre, and a widely acclaimed adaptation of Daphne du Maurier’s novel My Cousin Rachel, also for the Gate Theatre, Dublin.

In 2002, his novel Star of the Sea was published. A story set on a famine ship journeying from Liverpool, via Cobh in County Cork, to New York, it was a major departure from Joseph’s previous writing. The novel uses ballads, letters and diary entries to tell its story and was influenced by Charles Dickens, George Eliot and Wuthering Heights, as well as by the novels of Toni Morrison and Peter Carey, and by music. More than a year after its publication it was chosen by television producer Amanda Ross as part of the first ‘Richard and Judy Book Club’ selection. Enthusiastically reviewed on the programme by musician Bob Geldof and literary critic Bonnie Greer, the novel reached number one in the British bestseller lists and continued selling strongly for many months. It became the highest selling literary novel in Britain that year and has by now been published in almost forty languages. Star of the Sea has sold more than a million copies and has won prizes and accolades around the world, including France’s Prix Millepages, Italy’s Premio Acerbi, the Irish Post Award for Fiction (UK), the Sunday Tribune/ Hennessy ‘Hall of Fame’ Award, the Neilsen Bookscan Golden Book Award, an American Library Association citation, inclusion on the New York Public Library’s prestigious annual list of ’25 Books to Remember’ and the Prix Litteraire Madeleine Zepter for European Novel of the Year.

His subsequent novel, Redemption Falls, develops the multi-voiced narrative approach he had begun with Star of the Sea. Acclaimed by The Guardian as ‘a major work of modern fiction from an astonishingly accomplished writer’ and by Ireland’s Sunday Tribune as ‘a masterpiece’, the novel follows a number of the children of the Star of the Sea generation through the American Civil War and its aftermath. It was nominated for the Impac Literary Award and France’s Prix Femina and has been translated into many languages.

His novel, Ghost Light, (June 2010) is a poignantly beautiful love story moving from London in the 1950s to Ireland in the Edwardian era and theatrical New York in the 1910s. Its heroine, Molly Allgood, is based loosely on a real person: the Abbey Theatre actress who was for some years the lover and muse of the great Irish playwright John Synge. A shorter novel than Desperadoes, Star of the Sea or Redemption Falls, it follows Molly as she walks through London on a blustery day in 1952 on her way to a job at the BBC. Packed with music and memories, balladry and yearning, it extends the themes that have been present in Joseph’s writing from the start – love, endurance, emigration, family, the joy sometimes found in the trivial event – and offers itself as an uplifting homage to the act of storytelling itself, the belief that the show must be played with courage to the close. It received rave reviews, was shortlisted for the Hughes and Hughes Irish Novel of the Year Award 2011 and was chosen as a ‘Book of the Year’ by Colm Toibin (Daily Telegraph), Roddy Doyle (The Guardian), Charles Boardman (The Guardian), Tom Sutcliffe (The Independent), Peter Carey (Sky Books, Peter Kemp (The Sunday Times), Emma Donoghue (Sunday Business Post), Niall Crowley (The Irish Times), John Boland (Irish Independent) and Eamon McCann (The Belfast Telegraph). Other ‘Books of the Year’ mentions included the The Daily Mail, the Sunday Express, the Glasgow Herald, The Irish Sunday Times, Ireland AM (Kate Thompson) and Image magazine.

Joseph is married to playwright, screenwriter and novelist, Anne-Marie Casey. They have two sons. Anne-Marie’s novel An Englishwoman in New York was published and became an Irish bestseller in 2013. They have lived in London and Dublin, and from time to time in Manhattan, where Joseph has been a Research Fellow at the New York Public Library and Visiting Professor of Creative Writing/Writer in Residence at Baruch College, the City University of New York. For four years he broadcast a popular weekly radio-diary on RTE One’s ‘Drivetime’ news show; a bestselling CD is available. Joseph has given public readings all over Ireland and in many other countries, and in recent years has often appeared with the musician and filmmaker Philip King in their live stage show, Whole World Round, combining literature and traditional music of various kinds. He has also given many spoken word performances with musicians and singers, including Camille O’Sullivan, Paul Brady, Glenn Hansard, Andy Irvine, Eimear Quinn, Sam Amidon, Caomhín Ó Raghallaigh, Thomas Bartlett, Scullion, and The Chieftains. The dance show, HEARTBEAT OF HOME, for which Joseph was narrative and lyrics writer, premiered in Dublin in September 2013, transferring to China, Canada and the United States. The songs he wrote with Brian Byrne for the show are included on the acclaimed soundtrack album (Decca/Universal Music), recorded by Alyth McCormack, Jessica Sanchez, JenCarlos Canela, Lucia Evans, Tiempo Libre and the London Community Gospel Choir.

Joseph’s 2012 book Where Have You Been? was a new collection of his short stories (with a novella). Unusually for a collection of short fiction it was shortlisted for the Eason’s Irish Novel of the Year Award and was published in several European languages including Italian, French and Dutch. The book was highly acclaimed by many critics and listed by Peter Kemp, chief fiction reviewer of the Sunday Times, as one of the best books of 2012.

In 2011 Joseph was elected a member of Aosdana, a body established by the Arts Council in 1981 to honour Irish writers and artists whose work is deemed to have made an outstanding contribution to the arts. His novel Ghost Light was chosen as Dublin’s ‘One City One Book’ novel for 2011. In December 2011, he received an honorary Doctorate in Literature from University College Dublin. He was the winner of the Irish PEN Award for Outstanding Contribution to Irish Literature, 2012.

In 2014 he was appointed Frank McCourt Professor of Creative Writing at the University of Limerick. Places are currently available on UL’s MA in Creative Writing Programme, which will be taught by Joseph O’Connor and colleagues from September 2014. 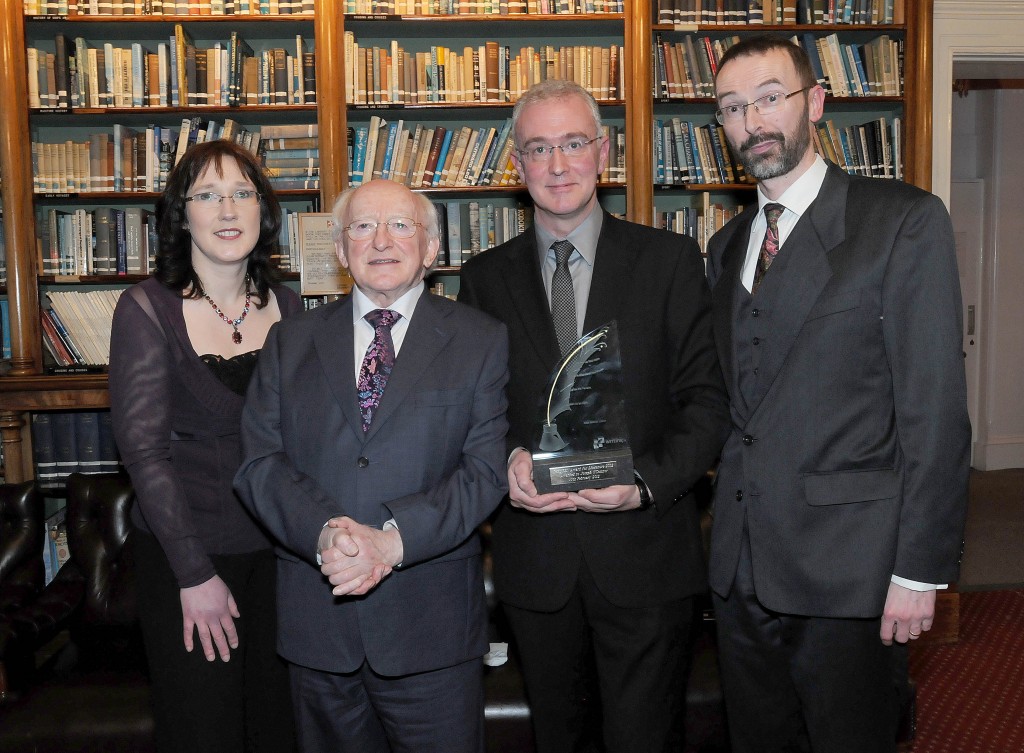