On Tuesday, the 25th August last, I attended a very special event in Dún Laoghaire.

It was an afternoon of torrential rain – unusual even by the standards of an Irish summer – when we met to celebrate the long and distinguished career of Fr J. Anthony Gaughan.

By rights, the large room of the Royal St George Yacht Club should have been filled to capacity with friends, well-wishers and colleagues from the community of Irish writers. But they could be with us only in spirit, as the regulations around Covid 19 meant that numbers had to be severely restricted.

And so there were three of us: Fr Anthony Gaughan, former President of Irish PEN; Vanessa Fox-O’Loughlin, Chair of the previous Irish PEN Committee, and myself, representing the newly-reorganised Irish PEN/PEN na hÉireann.

All those involved in the organisation over the years, including those now setting up the new Irish PEN/PEN na hÉireann, were determined to celebrate Fr Gaughan’s achievements and to present him with an award on the occasion of his retirement from the committee of Irish PEN. 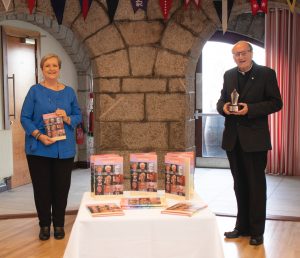 Active in the organisation since 1974, Fr Gaughan at various stages held the positions of committee member, President and Vice-President over more than four decades. We wanted to thank him for his tireless work over the years and also to celebrate the publication of his latest book ‘A Personal Perspective on Irish PEN’.

Along with his years of dedication to Irish PEN Fr Gaughan’s range of published work is extremely impressive. From his first publication on metaphysics to the four-part exploration of the life of the colourful, controversial, brilliant Alfred O’Rahilly, to the more personal ‘Recollections of a Writer by Accident’, the act and the process of writing have always played a central role in his academic and imaginative life. 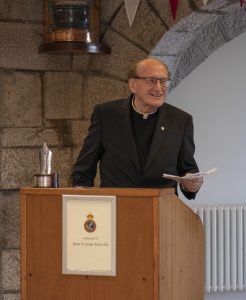 We took the opportunity on that stormy afternoon to reassure Fr Tony that the work over which he has presided for so many years will continue unabated into the future.

The small group that was the Freedom to Write Committee accepted with enthusiasm the invitation by the then Chair of Irish PEN, Vanessa O’Loughlin, to reinvigorate Irish PEN and to take it forward into what feels like a very challenging future.

In this age of toxic nationalism, of repression, of systemic racism, of the murder and imprisonment of so many writers who speak truth to power and corruption, we believe that the role of Irish PEN/PEN na hEireann to be more important and necessary than ever.

We look forward to continuing the work of the PEN Charter, to ensure that members ‘at all times use what influence they have in favour of good understanding and mutual respect between nations and people; they pledge themselves to do their utmost to dispel all hatreds and to champion the ideal of one humanity living in peace and equality in one world.

Catherine Dunne, on behalf of the Board of Irish PEN/PEN na hÉireann 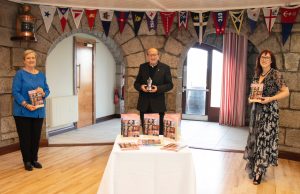