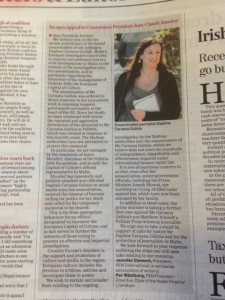 The following letter was published simultaneously in newspapers across the world on Monday 16th April 2018,  six months after the murder of Maltese journalist Daphne Caruana Galizia. This action was co-ordinated by International PEN, an organisation that celebrates literature and defends freedom of expression globally.

As part of the Freedom to Write Campaign, Irish PEN and WORD were in full support of this initiative and gathered the signatories below. The letter appeared in The Irish Independent on 16th April.

The Shame of Valletta 2018, European Capital of Culture

We write to you on the six-month anniversary of the brutal assassination of our colleague, Daphne Caruana Galizia, Malta’s foremost investigative journalist, to express our profound concern with developments in Malta in the context of the investigation into her assassination, and in particular regarding the behaviour of the management of Valletta 2018, the European Capital of Culture.

The assassination of Daphne Caruana Galizia was ordered in direct response to her journalistic work in exposing rampant government corruption at the heart of the EU. Since her death, we have witnessed with horror the repeated and aggressive destruction of the memorial to Daphne Caruana Galizia in Valletta, which was created in response to this horrific event. The Maltese authorities have not attempted to protect this memorial. In particular, we are outraged by the comments of Jason Micallef, Chairman of the Valletta 2018 Foundation, and as such the Capital of Culture’s official representative in Malta. Since her assassination, Micallef has repeatedly and publicly attacked and ridiculed Daphne Caruana Galizia on social media, ordered the removal of banners calling for justice for her death and called for her temporary memorial to be cleared. This is far from appropriate behaviour for an official designated to represent the European Capital of Culture, and in fact serves to further the interests of those trying to prevent an effective and impartial investigation into Caruana Galizia’s death.

Creative Europe’s mandate is the support and promotion of culture and media in the region. European  culture includes the freedom to criticise, satirise and investigate those in power. The role of the Chairman of the European Capital of Culture should be to safeguard this right, not to threaten it. We believe this behaviour completely demeans the role and has profound implications for the integrity of the programme as a whole. There can be no tolerance for the ridiculing of the assassination of a journalist in the heart of the EU, especially from the very authorities entrusted to promote the EU’s media and culture. We therefore urge you to immediately investigate these allegations against Jason Micallef. If found to be true, we urge you to call for his resignation and for the appointment of a qualified individual who demonstrates the requisite integrity for this role.

Further to these specific concerns relating to Valletta 2018, we wish to restate our broader fears relating to the ongoing investigation by the Maltese Authorities into the assassination of Daphne Caruana Galizia, which we believe does not meet the standards of independence, impartiality and effectiveness required under international human rights law. The very same individuals Caruana Galizia was investigating remain in charge of securing justice in her case, despite a judicial challenge in Malta’s constitutional court from her family, who has now been completely shut out of the assassination investigation. We therefore welcome the initiative of the Parliamentary Assembly of Council of Europe, which is taking the extraordinary step of sending a special rapporteur to scrutinise the investigation.

It is also of enormous concern to us that, even after her assassination, senior government officials, including the Prime Minister, Joseph Muscat, are insisting on trying thirty-four libel cases against her, which have now been assumed by her family. In addition to these cases, the Prime Minister is taking a further libel case against Caruana Galizia’s son, Matthew, himself a Pulitzer-Prize-winning journalist. We have reason to believe that these proceedings are in direct reprisal for his mother’s work in investigating corruption within the current Maltese government. The Prime Minister is currently compelling Matthew to return to Malta to stand trial, despite independent security experts advising Matthew to remain outside Malta due to substantial threats to his life there.

Whistle-blower Maria Efimova, who was one of Daphne Caruana Galizia’s sources on corruption within the disgraced Malta-based Pilatus Bank is facing extradition to Malta from Greece after a European arrest warrant was issued. We believe the charges against Efimova to be purely political and are deeply concerned about both her safety and the independence of the legal process she would face should she be deported to Malta.

We urge you to take a stand in support of calls for justice for Daphne Caruana Galizia and for the protection of journalists in Malta.

We look forward to your response outlining the steps you will now take relating to our concerns.

(and representatives of PEN centres in more than 30 countries, see below)

Burhan Sönmez, PEN Turkey, Member of the Board PEN International 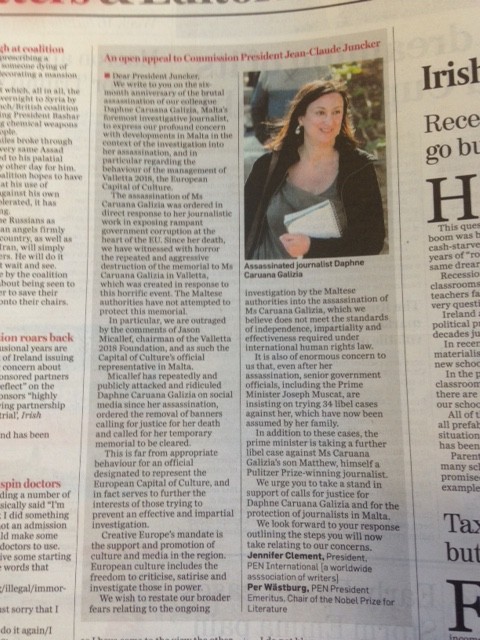