In the current political climate writer’s voices are vitally important. Irish PEN is working closely with the Freedom to Write Campaign and PEN International to offer support to writers worldwide who have been detained, imprisoned and even murdered in the pursuit of speaking their truth.

We were thrilled that Listowel Writers Week invited Irish PEN Award Winners Éilís Ní Dhuibhne and Catherine Dunne, who are both members of the Freedom to Write Campaign at an event to celebrate the words of writers who do not have the freedom to write. Chaired by Irish PEN Chair Vanessa Fox O’Loughlin, through poetry, prose and letters, they revealed the individuals who have stood up, those who have lost their freedom through sharing their stories. Listowel Festival Director Joanna Keane O’Flynn, whose father JB Keane was a previous President of Irish PEN introduced the event. 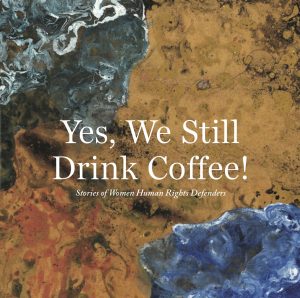 Catherine’s piece featured an interview with Hadeel BuQrais who is an active human rights defender and writer in her native Kuwait. She works as a freelancer to monitor and document violations by the Kuwaiti government. In Kuwait, human rights activism can be seen as criminal activity and attracts severe penalties. Any kind of protest is seen as ‘anti-patriotic’. Its government continues to be conservative and no criticism of the Emir is tolerated.

Hadeel has been active in support of women’s rights in Saudi Arabia, and continues to fight for the rights of the Bidun minority in her home country. She has been subjected to abuse, harassment and intimidation because of her human rights activities.

An Amnesty International Report on Kuwait 2017/2018 observed the following in its introduction: ‘Members of the Bidun minority continued to face discrimination and were denied citizenship rights. Migrant workers remained inadequately protected against exploitation and abuse. Courts continued to hand down death sentences and executions resumed after a hiatus of four years.’

Bidun: the word in Arabic, literally translated, means ‘nothing’, or ‘without nationality’. Kuwait treats the Bidun as illegal immigrants. As such, they are discriminated against in every aspect of their lives: work, health, education. In excess of 4,000 Bidun children have no identity cards. The card is essential, Hadeel says, to access anything in Kuwait, from education to healthcare. 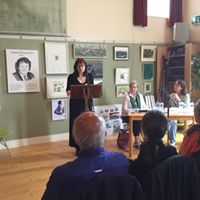 Vanessa went on to read Zehra Doğan’s letter to Banksy thanking him for the mural he painted on the Mural Wall in the Bowery in New York.  Zehra Doğan (born 1989) is a Kurdish artist and journalist from Diyarbakir, Turkey, a founder and the editor of Jinha, a feminist Kurdish news agency with an all-female staff. In 2017, she was sentenced to 2 years, 9 months and 22 days in prison for “terrorist propaganda” because of her painting, based on a government photograph, depicting the destruction of the Nusaybin, town in southeastern Turkey. Her imprisonment prompted international outcry and she was released in from prison in Tarsus on 24 February 2019. In March 2019, Doğan was nominated for Index on Censorship’s 2019 Freedom of Expression Awards in the Arts category

Currently International PEN are seeing the biggest issues for writers on their case list are lengthy prison terms. A total of 68 writers were imprisoned specifically for the practice of their profession or their peaceful activism, representing a third of the total. Almost half of these, 32, have been charged under anti-terror or national security laws. PEN is investigating the cases of 18 more where clarification is needed about the reasons for their detention.

In Africa and the Middle East, long prison sentences represent almost half of those regions’ PEN Centre caseloads, specifically long-term detentions in Eritrea, Egypt, and Iran. Thirty-two writers are held in Asia, mostly in prisons in China. In Europe, two thirds of those detained are in Turkey with a similar number there also on trial.

While in recent years imprisonment has not been used widely against writers in the Americas, harassment and threat is a constant source of pressure from state and non-state sources. The shadow of impunity lies heavy in the region with murders over the past years remaining unresolved. Lack of justice for writers killed is a factor in all PEN Centre regions, notably in Asia where religious extremists remain unpunished for murders carried out in recent years.

The work of PEN and all its Centres is needed more and more every year – the work that we do both collectively and as independent Centres and with affiliated organisations like Freedom to Write has extraordinary results.