Irish PEN have recently joined with members of WORD, a group of writers who meet at the Irish Writers Centre, to support International PENs Freedom to Write Campaign.

The Freedom to Write group plans to take one action for each season during the coming year. These will be linked to other events such as the Nollaig na MBan in January, the PEN Dinner Empty Chair, the Day of the Imprisoned Writer in November and PEN International global actions.

Led by Frank Geary and June Considine, please support us in campaigning for Ukrainian writer and filmmaker, Oleg Sentsov. Oleg is serving a 20-year prison sentence on spurious terrorism charges after a grossly unfair trial by a Russian military court, marred by allegations of torture. He is currently being held in the ‘Polar Bear’ penal colony of Labytnangi, in Siberia, thousands of kilometres away from his home and family in Crimea. He recently spent 145 days on hunger strike, calling for the release of all Ukrainian prisoners imprisoned in Russia on politically motivated grounds. He ended his strike on 6 October 2018 as he feared being forced-fed. 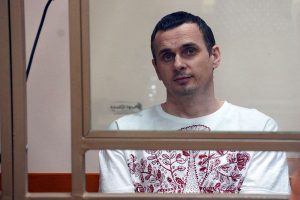 Follow our blog for updated news and current actions.

Join the Freedom to Write mailing list here to be alerted about campaigns – often we only need your signature or a tweet; from tiny raindrops, rivers flow.