In the warm and welcoming surroundings of the Royal St George Yacht Club, on February 22nd  2018, Anne Enright received the Irish PEN Award 2017, delayed slightly from 2016 due to her work commitments at Laureate. Irish PEN were delighted to welcome Sheila Bailey of PEN International and particularly pleased to be joined by so many friends from WORD, with whom we are working on an initiative to support PEN International’s Freedom to Write Campaign.

After Irish PEN chair Vanessa Fox O’Loughlin gave a short speech outlining the background to the award, June Considine from WORD, gave a superb summary of work to date and how Irish writers were supporting International PEN’s initiatives.

The beautiful silver trophy was made by Eileen Moylan in Kerry, photo by Ger Holland Photography. 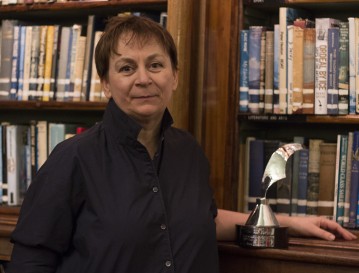