In 2019, the Freedom to Write Campaign was asked to take over running Irish PEN by the outgoing committee. We agreed to set up a steering committee to set up a new organization, Irish PEN/PEN na hÉireann, with new structures but still adhering to the principles of PEN International and the PEN Charter, on which the Freedom to Write Campaign was based.

Over the intervening months we have set up a Company Limited by Guarantee, a prerequisite for applying for Charitable Status. We have continued to be active in support of writers who are at risk or in prison because of their writing and we have fostered links with other writers’ associations in Ireland such as the Irish Writers’ Union, Aontas na Scríbhneoirí Gaeilge and the Letters With Wings project. We are also in close and continuing contact with our colleagues in PEN Centres in England, Scotland and Wales.  A Newsletter will go out to current Members in November with more details.

The new Irish PEN/PEN na hÉireann will be launched at an online Zoom event to mark the Day of the Imprisoned Writer: Sunday, 15th November at 7:00 pm (details tbc) Irish PEN was delighted to host a reading by Hugo Hamilton last month. The renowned author read from his new book Hand in the Fire. He spoke of the challenges of fictionalising and noted the theme of the outsider and acceptance within a culture recurs in his work. We learned too that the wonderful photo of the little boy concentrating with great determination, finger pointing at the text, on the cover of The Speckled People is none other than himself as a youngster. 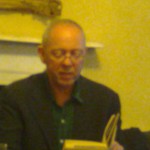 Hugo Hamilton reading from Hand in the Fire at Irish PEN

Good evening everyone, you are all very welcome. We have had a good year in Pen with many enjoyable and unique evenings with contributions from wonderful writers, but first, I must thank those who helped so much to make this possible. We are very fortunate to receive a small number of grants and are very grateful to the Arts Council who have given us a grant and will continue to do so this year which in the financial circumstance we are all the more grateful, although they have reduced the amount slightly. We thank Dublin City Arts for their continuing support which also means a lot to us. And may I thank the committee of the Arts Club here who allow us the use of this room and the bar, they are always helpful and we appreciate this comfortable and convenient venue. Our highlight of the year was of course the giving of the Irish Pen award for contribution to Irish Literature. This year the winner was the distinguished poet and lecturer Brendan Kennelly, and we presented this to him at our annual dinner. This was a sparkling evening. Brendan’s former TCD colleague Senator David Norris made the presentation for us with his usual brilliance, Brendan then most movingly showed his deep appreciation in receiving the award then gave us a magical recitation of poetry, interspersed with his great Kerry wit. All this happened despite the snow and cold in the hospitable Royal St George Yacht Club, and we thank them again for this wonderful facility. All of these things combined to make this a more than delightful evening. This leads me to mention that for the last two years we have not had a sponsor for our award, and we need one, Cross Pen generously supported this award for some years, this generosity we warmly appreciated. Now, however, we are looking for and needing a new sponsor, as our funds are small and limited, we would appeal to any member who might know a possible sponsor to let us know as we will be making an extra effort this year to find a new one. During the year we have had many distinguished and delightful writers reading from their work and discussing it, also panel discussions, and workshops dealing with all the various forms of writing from fiction,non fiction, humour, how to get published all beginning last May with Gerry Stembridge and Chris Binchy, in November we had a workshop on writing a successful novel with Patricia O’Reilly, also that month we had the pleasure and fun of having a conversation with Frank McGuinness who delighted us with his candour, his answers to questions were like his name frank and full of his unique creative energy. We also hosted Patricia Scanlon and Aidan Story, had a night for the Associate Members. We came towards the close of this year with the Great Debate, on the Arts and the Economy, the panellist included, Declan Kiberd, Arthur Lappin, Aidan Burke, Claire Doody, and Gerry Godley. It was a lively night with heated contributions from the floor. This just a taste of the many events that took place during the last year. Thank you so much to all these generous contributors. I would also add that we are in need of members subscriptions, we realise that hard times are upon us, but we do need your support to keep all these good functions going, thank you so much. Now I want to thank this wonderful committee, it is they who with great generosity do all the work, Dee Cunningham who acts as secretary taking all the minutes, Joe Armstrong who took great trouble setting up our web-site, Fr Tony Gaughan who is a long time member over the years and always helping on the committee, Catherine Daly who was such a dedicated Chairperson for the last few years. Caroline Brady thank you for all you have done, Fedelma Kelly who puts in such hard work and was such a help and support to me at the annual dinner, Mary Rose Callaghan who was there to help too, finally Marita Conlon-Mc Kenna, our present treasurer, who to our great regret is going off the committee this year. Marita is so knowable about PEN, has been Chairperson four times, and always full of energy and ideas. She sadly is retiring this year and personally I do not know what we will do without her, thank you Marita and all of the committee, you are all wonderful, generous and fun to be with. Thank you

The Arts and the Economy

Irish PEN, in association with Dublin City Arts 0ffice, is delighted to announce its forthcoming debate on the Arts and the Economy.

Gerry Godley, Director of the Improvised Jazz Company, broadcaster and spokesperson for the National Campaign for the Arts (NCFA)

Arthur Lappin, Film and Television Producer, In America, My Left Foot, The Field and Some Mother’s Son

The debate will explore the role, and vital contribution, of the Irish arts for the national economy, adds to the current public deliberations on the value of the arts to Ireland’s economic and social recovery.

All are welcome. Early booking advisable as places are limited.